You are here: Home / News / Among Humans and Nature

We humans are the only species living on the surface, under and above the skin of Mother Earth that have had the ignorance, arrogance, senselessness to pretend that Her nurturing elements: soil, water, wind, fire, mountains, rivers, oceans, insects, animals of all sorts, can be subjected to appropriation, abuse, domination, exploitation, and turned into resources, merchandised, destroyed, extinguished for our own benefit, greed and foolishness.

Once upon a time we were grateful for Her power, we respected Her, we thanked and paid offerings every time we took something from Her: wood from a tree, fresh water from the springs, a fruit, meat or the skin from an animal. Every day that the sun shone we offered our blessings for its warmth, its energy and luminosity. Every night we observed with awe the movement of the moon, the stars, trying to understand how they affected our moods, the seasonal cycles of our common Mother. One day we woke up feeling that we, humans, were the chosen children of creation, or evolution, depending of our degree of ignorance, and we decided that we were the centre of reference, dominance, rights, above all those surrounding forms of life that had existed for millions of years before our appearance.

And all of this because we thought, accepted and institutionalized the absurd and false lie that some people were born with rights over other people, men over women, humans over Nature, whites over blacks, yellows or red skinned or anything different from ourselves. Churches of all denominations, and governments of all ideologies were built like pyramids, and the circular-spiralling form of social organization, inspired by the movements of the Universe, was considered obsolete, and with it the respectful relationship between humans and non-humans, including Mother Earth herself, was broken forever.

Our actual system of beliefs, our globalized way of life, our economy, education, health systems, our whole paradigm itself is based in this erroneous misunderstanding, and for centuries or millennia, the self-elected, and now even the “democratically” elected governments, corporations, institutions and religions, continue programming us, generation after generation, with more and more sophisticated technologies of mass control, to abide, believe, need, fear, live and die the way it benefits best the functioning of the global marketing machine.

Facing the actual civilizing crisis and the forthcoming possible sixth extinction of a large part of our own species and millions of other living beings such as ourselves, who depend entirely on Nature to survive, and becoming aware of the self-destructive path we are gearing to, intentional communities, Ecovillages, transition projects, permacultural centres, eco-neighbours, green towns, cities of resistance, Ecotopian territories, as well as resilient traditional communities, among other forms of social justice and ecological settlements, are a frail attempt to create, not an illusory return to the past, but a possible future for the coming generations.

As part of our own anthropocentric conditioning, humanity has achieved many victories to gain more and more access to rights to abolish slavery, discrimination, colonialism, gender inequality, inclusion, self-governance and social justice, all of them rights to improve our own condition as the privileged species we consider ourselves. Still forgetting that there is nothing as human rights, if we first do not recognize that our survival depends on the health of our common Mother.

It is therefore the purpose of this reflection, to remind us that at this point of our “eco-evolution”, if we do not become sacred environmental and human right activists at the same time, remembering that “the earth is not ours, but we are only part of Her,” we will continue sliding into our doom.

Less than 10 years ago, two small countries, Ecuador and Bolivia, the poorest in South America, decided to change their fate. They adopted parts of their ancient cosmology in their federal constitutions: laws to recognize the rights of Pachamama as equally important as human rights.

This important step, in spite of the enormous difficulties that those countries are facing to actually be able to make those laws be acted upon, has inspired sacred activists in many parts of the Earth to start national and international campaigns for the defence and protection of environment, and to force governments to adopt laws to give legal rights to rivers, glaciers, forests, national parks, ceremonial grounds and territories on the basis of their sacredness.

For decades ecologists have been struggling to create and promote environmental awareness to the rest of humanity. From Greenpeace to Earth First radical actions, to conservationist foundations, animal rights organizations, anti-nukes mobilizations, bioregionalism, green parties, they all have been active in the protest and defence of Nature.

Yet another part of this awareness brought us, many thousands of us, to move further from the protest scene, to begin proposing new models of livelihood, new sustainable settlements, and even further up in contemporary history, rural and urban communes, intentional communities, and only recently, Ecovillages.

We have now a half a century of experience of the “new story” since this movement was born, has grown and spread out around the Earth in a relatively short time. The Federation of Intentional Communities in North America, and more recently, the foundation of GEN, prove that we had a clear idea, not only of what we did not want from the dominating global paradigm, but that we were committed to experiment and try to create an emerging “another world”, one based on a very different set of values and lifestyles.

All those experimental social and environmental projects are providing immense and necessarily rich tools of change, which keep improving generation after generation. The Ecovillage Design Education (EDE) program, Gaia University, Ecohabitar and others are also contributing largely to support young people all over to become leaders in the process of development and application of new models of sustainable settlements. However up to now, there is a lack of understanding of precisely how our Ecovillages can become the examples of how to put all sort of campaigns for the rights of nature into practice and how to promote them through new forms of activism.

To re-learn to live in harmony and respect for Nature in this time in history is a sacred attitude that we need to pass and share to as many as possible of our other us human fellows. And to move a step forward and take part of local, national and planetary campaigns for the adoption of legislations that recognize the intrinsic rights of Mother Earth, is an endeavour that we can all get into, wherever we are and at all level of jurisdictions.

For a Universal Declaration of the Rights of Nature! 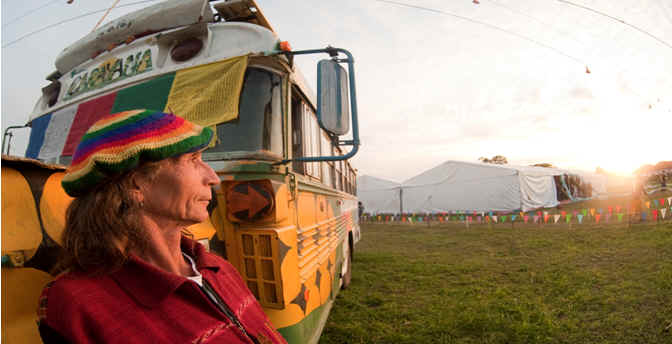 “Coyote” Alberto Ruz is the co-founder of the Ecovillage Huehuecoyotl in Mexico and of the Eco-Caravanas, a nomadic group of activists travelling for 13 years in Latin America, sharing knowledge on community building and sustainability.