You are here: Home / News / Argentina 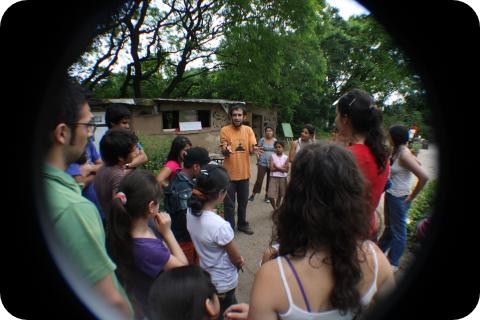 In front of the largest football stadium in Argentina lies an intentionally sustainable community. This is the ecovillage VelaTropa, located in the city of Buenos Aires, on the other side of the River Plate football club’s home. Along with Boca Juniors, River Plate is considered to be the best Argentinian club and, due to their rivalry, they create a classic, world famous game. Reported by Henny Freitas, EarthCode Project.

Referred to as the Paris of South America, Buenos Aires hides an interesting history of emancipation. It was considered an autonomous district after the 1994 constitutional amendment, hence its formal name: Autonomous City of Buenos Aires. And it still exerts its autonomy when ideas of new ways of life are presented.

This is the case of VelaTropa. In a beautiful corner of the city hides a small village with ecological projects including natural constructions, recycling, veggie gardens, ceremonies and a more harmonious connection with nature. All that remains inside a university and outside the system, where time has no time. Or at least that’s the proposal of the inhabitants of the community, who live according to the guidelines of permaculture and are guided by Mayan philosophy of the 13-Moon Calendar.

Velatropa began in 2007 as an environmental experimental centre, a place to learn to follow the natural cycle in the city, to make responsible use of resources and be aware of the management of our planet. It is based on the foundations of what was to be the pavilion five of the University City. The space, abandoned for decades, belongs to the University of Buenos Aires (UBA). Kept out of sight among the trees, vegetation and concrete, the ecovillage is still not known to most locals, but fairly widespread among students and university members of staff.

The ecovillage is an environmentally sustainable, interdisciplinary community self-managed by students of the UBA and travellers who decide to look after this place as their own home. A trail behind the pavilions along with the river bank leads inhabitants and visitors to a portal and a welcome sign that says “Natural Reserve of University and Citizen”.

The project grew to the point of arousing interest from the government, who once wanted to stop the initiative and replace the natural buildings with a shopping centre, and the permaculture activities with a concrete playground. I happened to be living there when this happened. Bulldozers entered the place and started to pull everything down, starting with the veggie gardens and small trees. Hand by hand we made a human cord and took turns for a week impeding the driver from proceeding with this brutal action. At the same time, supporters of the cause were called and dozens of people started to arrive from everywhere in the city of Buenos Aires. Together we created a task force for planting native and fruit trees, orchards and vegetable gardens.

Everyday in those thirteen days of living, working and celebrating life together, villagers and visitors such as myself cooked natural foods and shared them amongst all of us. With no money to invest, the food always came in an unusual way. Bicycle tours were arranged night after night, in different parts of the city where waste fruits and vegetables were visible. What we could gather was washed with water and vinegar in a bathtub in the middle of the kitchen and arranged in makeshift shelves to dry.

Smoking and drinking alcohol are not allowed. There is a special area for doing so. The common buildings are free-styled designed from adobe, clay and fully recycled materials: glass bottles, wood and plastics. There are also small geodesic domes used as accommodation, beside tents and hammocks.

Although it may be seem at first as libertarian, Velatropa is governed by an organization of council decision makers in program meetings held weekly and take turns in school’s visits, bee cultivation, recycling products, development of appropriate technologies, construction, gardening and even cooking patties to be sold among students of the University City as a way of income. Most of them are vegetarians and sustain themselves with the fruit of the gardens designed on land formed with concrete rubble.

Velatropa would be just another interesting ecovillage if not because its location. While community members eat, discuss, and meditate in a circle, a plane passes at low altitude and roars overhead before landing at the nearby airport.

After having worked for 18 years in the corporate world, I started a journey of personal transformation that led me to the ecovillage world. I have lived in Findhorn and served GEN for 1,5 years and now I'm starting a new journey, going back to the urban scenario, carrying community and everything I've learned with me. Get in touch if you are interested in doing a project together or just to share experiences over a cup of tea (real or virtual).