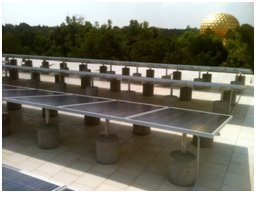 Auroville, a growing international township near Puducherry on the Coromandel Coast in India, is an inspiring model for sustainable practices and ecologically-responsible living. Founded in 1968, Auroville is based on the vision of The Mother from the Sri Aurobindo Ashram and is endorsed by UNESCO and Government of India as an ongoing experiment in human unity. Over the years, Auroville has won international acclaim for its efforts in social and environmental sustainability.

The efforts and interest that Auroville has collectively put towards making renewable energy options practical, affordable, and usable perhaps is one of the best examples of Auroville’s motto of being a place of unending education. Auroville, initiated more nearly 50years ago in a landscape which was then remote and devoid of any infrastructures, made it necessary for residents to take up renewable energy initiatives, such as windmills for pumping water, and solar photovoltaic panels for lighting. By plan, the green belt in Auroville that surrounds the city-area in the center is mandated to remain off the grid. This continued to encourage new innovative green energy initiatives over the years. The technologies that were tested and used – include (and are not limited to) bio-gas, solar thermal applications in appliances and building construction, several generations of windmills to pump water, solar PV systems for electricity and pumping, and so on. Such energy options have improved lives within Auroville, in the bioregion, and in the areas far beyond. Today Matri-Mandir in Auroville hosts the largest solar PV installation in India, and solar kitchen equipped to cook for more than1000 people everyday primarily uses the energy generated from the largest solar collector in Asia developed and build indigenously at Auroville. The concern for climate change, the urge to have a smaller foot-print on earth, and the combined effects of resourceful minds from the area and around the world have created a Medici-effect encouraging further innovation and application of renewable energy designs, systems, and modules in Auroville. It is almost impossible to include an exhaustive list of current renewable energy initiatives; they include – solar home and street lightings, solar drier, solar water heater, solar space conditioning (dehumidifier /air conditioner), solar cart, electric vehicle, biodiesel, algal-fuel, wind-generator, passive solar buildings, and many more.

Auroville has much to contribute towards materializing sustainable development through renewable and decentralized energy systems. Within India millions of people do not have access to grid energy. Moreover, the supply is not reliable even for those who are connected. Similar situation exists in many developing nations around the world. Auroville acts as a living laboratory in developing, adapting, and testing renewable energy designs, systems, and products that can then be adopted elsewhere.

Since the early days

Auroville has been active in the field of renewable energy since its inception. In the early years of Auroville wind mills for water pumping were installed and the first experiments with solar photo-voltaic (PV) panels took place.

Today Auroville has stand-alone solar PV installations with a total capacity of about 250 kW. Most of these systems can be found in the green belt of Auroville. Since 2012 Auroville has also been installing grid-connected solar PV systems.

In January 2012, Auroville Consulting (a unit of Auroville) made a presentation to the Tamil Nadu Government in which it was proposed that Auroville would install at its own cost a few grid-connected rooftop solar PV systems as demonstration projects. Tamil Nadu had at that time no solar energy policy and there was no provision for connecting solar PV systems to the public electricity grid. The Tamil Nadu Government agreed to the Auroville proposal and a total of 10 pilot projects with a total installed capacity of 100 kW were installed in Auroville. These pilot projects helped all concerned, including the Tamil Nadu Electricity Board and the Tamil Energy Development Agency, to get a better understanding of the functioning of grid connected solar PV systems. These pilot projects also helped in addressing apprehensions and concerns on the part of Tamil Nadu Electricity Board relating to safety, interconnection standards and metering. The Tamil Nadu Government came out with a solar energy policy in October 2012 and small scale (rooftop) grid connected solar PV systems with net metering is part of that policy. The total capacity of grid-connected solar PV systems in Auroville has meanwhile grown to 132 kW, distributed over fourteen rooftop systems and one ground-mounted system. Most of these systems make use of the solar net-metering facility whereby the exported energy is deducted from the imported energy to arrive at the chargeable net-imported energy. Auroville Consulting developed technical specifications and guidelines for small scale grid connected solar PV systems and these were adopted by the Tamil Energy Development Agency. Auroville Consulting also supported several state electricity regulatory commissions in shaping their solar energy policies. The practical experience that Auroville had gained in this regard was helpful in providing these advisory services.

The development of renewable energy goes hand-in-hand with the implementation of energy conservation and efficiency initiatives. Several energy audit programs have already been implemented. In Auroville extensive use is made of energy efficient lights and equipment.

Auroville developed its own electric bikes with a team of young and energetic Aurovilians teaming up to develop the Humvee.

Today many Auroville residents can be seen moving around on a Humvee bike.

Auroville has two units that are active in the area of solar system design, supply, installation and maintenance, Auroville Energy Products (www.aep-auroville.com) and Sunlit Future (www.sunlitfuture.in).

Auroville Consulting organizes Green Practices Workshops on a regular basis (www.agpworkshops.com) and has established an Auroville Green Portal that gives an overview of Auroville activities and projects relevant to sustainable development (www.green.aurovilleportal.org).

Auroville Consulting also trained officers and engineers of municipal corporations in Tamil Nadu for which the Program for Responsible Energy Management (PREM) was designed and implemented.

Plans for the future

An Auroville electrical master plan has been prepared which calls for distributed renewable energy generation and local energy storage to ensure that the Auroville Township continues to be an energy positive habitat. In the immediate future additional rooftop solar PV capacity will be added.