You are here: Home / News / Ecovillage Movement in China

The partnership and friendship between GEN and the Sunshine Ecovillage Network (SEN), in China has been growing in the past year, since the first Ecovillage Forum organised by SEN took place in October 2015, drawing around 500 interested participants. Ecovillage Design Education courses have previously been run in China, led by Pracha Hatanuwatr and Jane Rasbash, and many young Chinese have participated in ecovillage training elsewhere. Chinese representatives have been reaching out to GENOA – deepening the bond and stepping in to strengthen the Asian ecovillage network. Kosha Joubert and Anja Elena Lyngbaeck** report.

In April and October 2016, GEN Consultancy completed its first work in China, with trainings facilitated by Kosha Joubert, Robin Alfred, Dorota Owen and Albert Bates all offering distinct perspectives and expertise on ecovillage solutions. One of the trainings was arranged for government representatives of the Songyang district, where Mr. Wang, the Party Committee’s Secretary, expressed his interest in exploring the transition of 70 of the most beautiful traditional villages of China.

While China continues its policy of mass industrialisation and urbanisation, there is, in parallel to this, a growing sense of awareness about environmental protection. China played a positive role at COP22 in Marrakech, stepping in as the delegates digested the shock of Trump’s election and expression of intention to pull out of the Paris Climate Agreement. The President of China, Xi Jinping, has expressed that the true wealth of China lies in its green mountains and clear waters. We met with widespread awareness for the preciousness of natural and cultural wealth that is deeply rooted in local tradition and Taoism.

So, how does GEN relate to governments with typically mixed agendas and, in China’s case, an appalling human rights record, when there is interest in positive community development?
This is a question that we will be carefully exploring in coming months.

On October 22nd and 23rd, 2016, Sunshine Ecovillage forum, in partnership with the Global Ecovillage Network, organised the 2nd International Ecovillage Forum. It was held in Hangzhou, capital of the Zhejiang province, and brought together delegates from China, Taiwan, Thailand, Europe, and the USA.

The event drew over 400 people: students, social entrepreneurs, teachers, NGOs, farmers and members of existing ecovillages, amongst many others. GEN was represented by Kosha Joubert, Robin Alfred and Albert Bates. Local Futures* was represented by Anja Lyngbaeck – and GEN and Local Futures are happy to announce a growing collaboration.

There are currently only a handful of existing intentional ecovillages in China, but there is a growing interest in transforming existing traditional villages into sustainable ecovillages. The Sunshine Ecovillage Network has set the ambitious target of 100 ecovillages by 2020.

At the event, representatives from more than 30 traditional villages signed collaborative agreements with the Global Ecovillage Network (GEN), and the Sunshine Ecovillage Network (SEN), to transform into ecovillages. The Chinese government is not directly involved, but looks favourably upon the concept. Things may move fast from here, so watch this space.

*Local Futures/International Society for Ecology and Culture (ISEC), founded by Helena Norberg-Hodge, is a non-profit organization dedicated to the revitalization of cultural and biological diversity, and the strengthening of local communities and economies worldwide. Helena has been closely involved with GEN since its inception. More: www.localfutures.org
**Anja Lyngbaeck is Associate Programmes Director at Local Futures. During the Forum in China she gave a talk about the economic dimension, called “Global to local: towards economies of
happiness”.

Kosha Joubert, MSc served as Executive Director of the Global Ecovillage Network. She has many years of experience as an international facilitator, trainer, and consultant and has worked extensively in the fields of community empowerment, intercultural collaboration and sustainable development. Kosha grew up in South Africa under Apartheid and has been dedicated to building bridges across divides ever since. She has lived in ecovillages for the past 25 years. Kosha is also a co-founder of Gaia E… 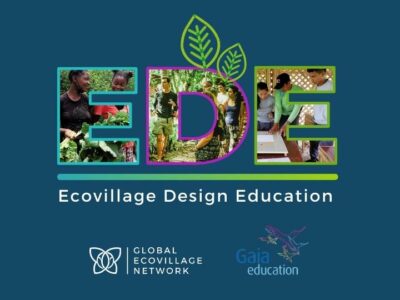