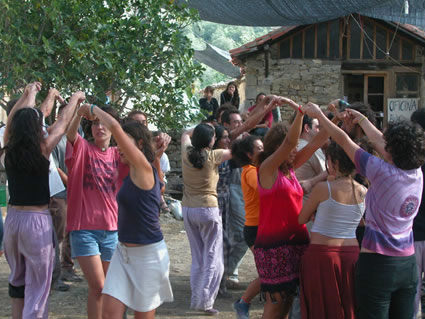 One of the biggest problems facing governments in many European countries is rural exodus, with the majority of the world’s population dreaming of life in cities. In opposition to this trend, certain ecovillages and communities, mostly established in degraded or abandoned rural areas, have reversed downward population trends in certain municipalities and their peculiar development style is reflected in increased local opportunity. Ecovillages have prevented school closures, promoted the local economy by helping local businesses, and influenced the social environment with a new vision of social resilience in rural areas.

Like in Africa, in some areas of Europe an important fact is that eco-communities have attracted young people from the city to move to the countryside. The solution always comes from the joint investigation of new forms of local economy in rural areas and the transformation of urban habits into initiatives that generate employment or resources. The production of goods and the exchange of resources always adds positively to the rural arena. On several occasions, representatives of institutions visit ecovillages and look for strategies to replicate the ecological awareness present in ecovillages in larger groups of citizens. Ecovillages often receive visits from nearby schools as examples of sustainability in practice. Communities are at the forefront of changing habits that will occur on a global scale. There is an awareness that young people need examples of a full life and well-being

Conferences on Ecovillages as an alternatives to Rural Exodus in Pamplona, Spain

With the title “From abandonment to life”, the first of a series of conferences began in June with a day of investigation held on the project for the repopulation of abandoned villages, a collaboration between the Government of Navarra and the Iberian Ecovillage Network, RIE. The objective of this project, whose title is “To re-inhabit the land from sustainability: proposals to reverse rural depopulation,” is to develop a pilot plan that serves as a model to re-inhabit abandoned villages.

At present, more than 70 towns of the Autonomous Community of Navarra are uninhabited and there is concern from the Government to find a solution to reverse this phenomenon. This conference  purpose was to investigate among local leaders (town and neighbourhood councils, boards of the Valleys, Federations of municipalities and councils, local development agents, ecovillages and other projects and initiatives that are already being carried out for repopulation) the problems related to the rural world and how to stimulate the repopulation of abandoned villages and give them life from a sustainability perspective.

A followup conference in November will show successful examples of rural settlements and ecovillages around the world. The next step will be to carry out a pilot project in an abandoned village of the Comunidad Foral de Navarra mentored by the Iberian Ecovillage Network and under the auspices of the Government of Navarre. The repopulation model promoted by the Iberian Ecovillage Network is based on proposals to reverse rural depopulation, land custodianship, entrepreneurship, agroecological practices, transition and degrowth, among others. For more than 30 years, various ecovillages throughout the world, have demonstrated the viability and durability of this type of settlement. Especially in the Navarra region, we have the oldest example through an occupied village, the beacon of our movement: Lakabe,  which has showed for over 35 years that rural exodus can be reversed, and furthermore, can be an opportunity to regenerate lands and social environments.

A full report on this programme, conference and other initiatives to develop ecovillages in Europe are published on the GEN Europe site.