You are here: Home / News / The First EDE Course in Palestine

In November, the first Ecovillage Design Education (EDE) in Palestine took place: two weeks of learning, sharing, and community empowerment. In spite of the many challenges under the present political conditions, the Palestinian village Farkha in the West Bank has great promise of becoming a model of a sustainable village.

The plans for this first EDE course in Palestine started in fall 2014, when GEN and Global Campus Palestine (an initiative to create a network and share skills for sustainability in the West Bank) co-hosted a project called ‘Waters of Hope – Nourishing the Heart of Sustainability’ in the Westbank. A´ida Shibli, Palestinian peace activist and GEN member, and Kosha Joubert, now executive director of GEN, worked closely together to make this happen. Kosha and A’ida met with some of the people who had been involved with GEN in the past, and A’ida introduced Kosha to Sa´ad Dagher, 52, an engineer, permaculture teacher, and Reiki master, who has spent several decades creating a network for eco-agriculture in Palestine. He sees that the restrictions placed on Palestinians to supply themselves in their basic needs: food, water, and energy, are a political issue. His answer is to teach farmers about natural farming, as one of the most effective ways to work for peace and justice in this region. Sa´ad has always understood the importance of the natural water cycles and of the power of community in deep connectedness to nature. With him, GEN and GCP found a committed and reliable partner in Palestine.

GEN followed Sa´ad´s and A´ida´s suggestion to approach the village of Farkha as an inspiring community in the Westbank, that is wishing to be recognised as an ecovillage and ready to host an EDE. The village has many advantages: situated in a mountainous area, the main income of the 1500 inhabitants is agriculture. Farkha´s inhabitants have a history of community solidarity and independence of spirit, growing from an islamic form of socialism. The first EDE scouts were very impressed by the high level of self organisation and social interaction: despite the lack of public services, the streets are clean and full of trees; there are numerous clubs, cooperatives and social organisations for sport, for youth, for women, and representing all kind of social interests. 40% of the households maintain gardens to provide themselves with fresh food, and 70% of them collect rainwater. The village has mixed-gender schools, and all children, including girls complete their schooling, most continue to go to university.
A´ida Shibli: “Palestinian villages used to be like that, and would still be if they were not disturbed by globalisation and occupation.”
In a village with so much inner wealth, it was not so much a question of what the population could learn but more of what they had to share. 25 participants from Palestine and 6 internationals participated in the two-week EDE course, 12 of these came from the village of Farkha itself. Most of the other Palestinian participants had already taken part in the Global Campus events of the last years. All age groups from, 20 to 70, were present, including many very active women from the village.

The first week was mainly facilitated by Kosha, who taught the skills and knowledge needed to create an ecovillage, including mapping strengths and weaknesses in each of the 4 dimensions (ecology, economy, social and cultural), identifying stake holders, and design principles. In her special playful and skilful way she could break the ice very fast, and create a joyful learning atmosphere for all participants. Many of the villagers found it helpful that these teachings gave a frame, a structure, and a broader context for understanding the actions they had been taking already.
For the different dimensions of sustainability, including non-linear leadership, there were different Palestinian experts teaching. One of them was Sami Awad, teacher of non-violence from Bethlehem. Another was Prof. Mazin Qumsia from Bethlehem who taught about wildlife and, interaction with Israeli settlements, in his words ´colonies´. Sa´ad taught ecosystem restoration. Farmer and permaculture designer Murad Alchufash presented his permaculture model. Fayez Taneeb spoke about farming as politcal resistence. Samera Asafadi presented the animal protection league that she works for. As the time went, more and more of the participants started to share their skills and experiences in building community and sustainability.

Once the Community Resilience Plan was initiated, pointing out core improvements to be implemented in the 4 dimensions, the EDE course became hands-on: together with Bernd Müller, water specialist from Tamera, participants learned and trained how to harvest rainwater directly into the soil, to maintain the humidity and fertility of the land. The participants worked on three hectares of land that had been donated to the village so serve as an ecological model garden and to showcase sustainable techniques, building swales and terraces. In the end the garden had a water retention infrastructure.
Bernd: “I was impressed how fast the participants understood the principles. They could create an amazing infrastructure. Bakhr, the major of Farkha, who also is a poet, ‘downloaded’ a new song during the work and sang it to all of us. For me this was a huge blessing for the work.”

After teaching in the EDE, Bernd was invited to consult with different organisations and communities in Palestine about sustainable and natural water management, accompanied by Sa´ad Dagher.

The last days were facilitated by Alice Gray, a permaculturist, A’ida and Sa’ad. It was a time of implementation of some of the plans that had been developed in the first week: systems for separating garbage, for composting, and rooftop rainwater harvesting were installed. Trees were planted and seed-balls to sow over a wider areas created.

A´ida: “In the evenings the groups came together and shared in an intensive learning atmosphere. We never forget that we are in an occupied country. One of our participants needed to go to Nablus, on his way back he witnessed a young woman being shot by soldiers. He arrived to our place shivering and in deep shock. This affected the whole space. During the last two months more that 110 Palestinians were killed, and the atmosphere in the region is painful. Dealing with violence and trauma in a healthy way is a part of the knowledge that we need. Creating resilience as a group under such extreme situations means that we need to take care of each other. We were able to dance and sing in joy whenever it was possible: I take that as a sign for our faith in life.”

The EDE course will be continued in 2016. The project was financed by the Climate Funds from the German foreign ministry. Huge thanks go to the logistics team which was holding so much in the background, and namely Mena Vieira, Executive Secretary of GEN and lover of the Holy Land, for their unwavering commitment. 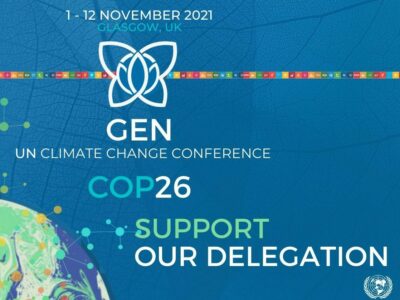