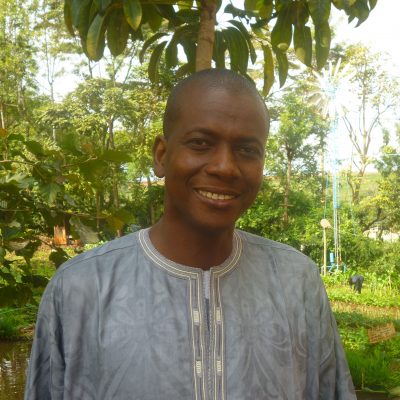 Dr. Ousmane Pame is an educator and a community leader. He worked as the resident Academic Director of Living Routes at the Dakar Earth Rights Ecovillage Institute. He is the director of academic programme in ecovillages which engage international and local students on rural community projects. Since 1997, Dr Pame has been actively involved in community development projects in Senegal (capacity building, permaculture, agroforestry, fish farming, drinking water, nutrition and food processing programmes for rural areas,). He has been supporting deprived school children in his region through distribution of free school and classroom construction materials. Thirty-five villages have benefited from his programmes. In December 2007, after participating in an ecovillage design course in Auroville (India), he introduced the ecovillage concept to his community (7000 people). Two years later, he was
elected as mayor of the Guédé Chantier, the first in the history of his community. During his
mandate, he strived to transition his municipality in an eco-community. He also supported the
transition of other communities in the West African region. He is a founding member and
President of the Global Ecovillage Network/ Africa and of REDES (Network for Ecovillage
Emergence and Development in the Sahel.

A lot has taken place in and around the eco-community of Guede lately, including at least three partnership programmes made possible with the financial and technical support of ​Damanhur and coordinated with REDES (French acronym for Network for Ecovillage Emergence and Development in the Sahel). Some of the work includes planting an orchard with a women's association in Madina Fresbe village (a community of herders), training over a hundred women from 15 villages in food processing, and … END_OF_DOCUMENT_TOKEN_TO_BE_REPLACED