As scientists warns that global temperature is already 1.1°C above pre-industrial levels, and young people are taking to the streets demanding that politicians take urgent action on this climate emergency, governments of 197 nations gather in Spain for the UN Climate Change Conference COP25. The Global Ecovillage Network (GEN) joins efforts with civil society at COP25 as a part of its ongoing work to catalyze communities for a regenerative future.

Kosha Joubert, Executive Director of GEN said: “Fridays for Future and the Extinction Rebellion have been raising awareness for the Climate Emergency and demanding real change. The Global Ecovillage Network is an expression of that real change, born from the hearts of people around the planet who long to be part of the solution, not the problem, and who are willing to get out of their comfort zones in order to step into their integrity.”

This year, GEN is hosting a delegation with 11 community leaders from all of its 5 regions, including representatives from Brazil, Colombia, Cameroon, Ghana, Morocco, Australia, New Zealand, United States, Germany and the United Kingdom.

GEN’s main objectives at COP25 are to lift the voice of community-led initiatives and showcase ecovillage solutions for climate adaptation and mitigation, with examples of these are featured on GEN’s website at ecovillage.org/climate-solutions, as well as to reach out to governments, business representatives, and partners in order to scale up the work and impact of the ecovillages in the world. See Ecovillage’s Impact Assessment at ecovillage.org/impact-assessment.

“Today, GEN reaches out to over 6000 ecovillages and eco-projects in 114 countries, in Africa, Asia, Latin America, Europe and North America. We are present at the COP Conferences in order to influence governments to start supporting community-led responses to the Climate Emergency,” Ms. Joubert said. “And we agree, more political will is needed to instigate the changes demanded – it relies on us, the people of the world to stand up, raise our voices and start believing in our own capacity for transformative action.”

Since 2000 GEN has had consultative status at the UN-Economic and Social Council (ECOSOC) commission, and is represented at regular briefing sessions at the UN Headquarters in New York. The Special Consultative Status with ECOSOC gives GEN the chance to join in the work of various committees relevant to its concerns to promote sustainable communities and practices worldwide. GEN has been participating at COP since it’s 15th edition in 2009 in Copenhagen, Denmark, and has sent delegations to every edition since COP21 in Paris, France.

GEN’s schedule for COP25 was very busy. On Tuesday, December 4, the Global Ecovillage Network was invited by The Nordic Council to give a talk about “The Power of Culture, Nature and Community-led Development in response to the Climate Emergency.” GEN was represented by Kosha Joubert (Executive Director), Jennifer Trujillo (GEN President, CASA Colombia) and Kenza Isnasni. 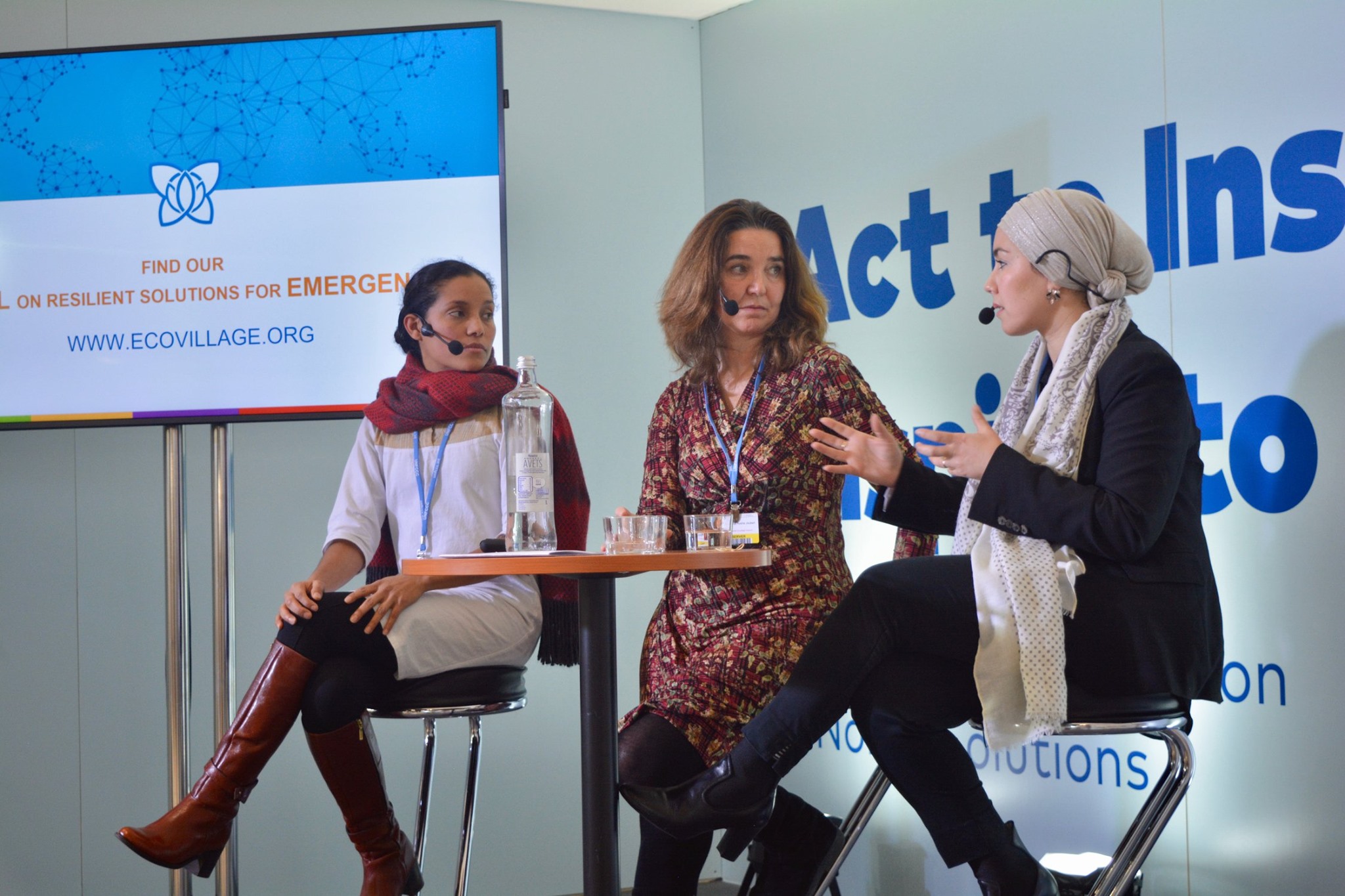 As part of COP25’s official schedule, GEN hosted the exhibit “Communities and Culture: Critical for Transformative Climate Action“, on December 4 and 5 at Booth 19. This space provided a ‘home’ at COP25 for communities, business and government representatives to explore GEN’s efforts to catalyze communities for a regenerative future, supporting poverty reduction and climate resilience in our world’s materially and financially poorest places. 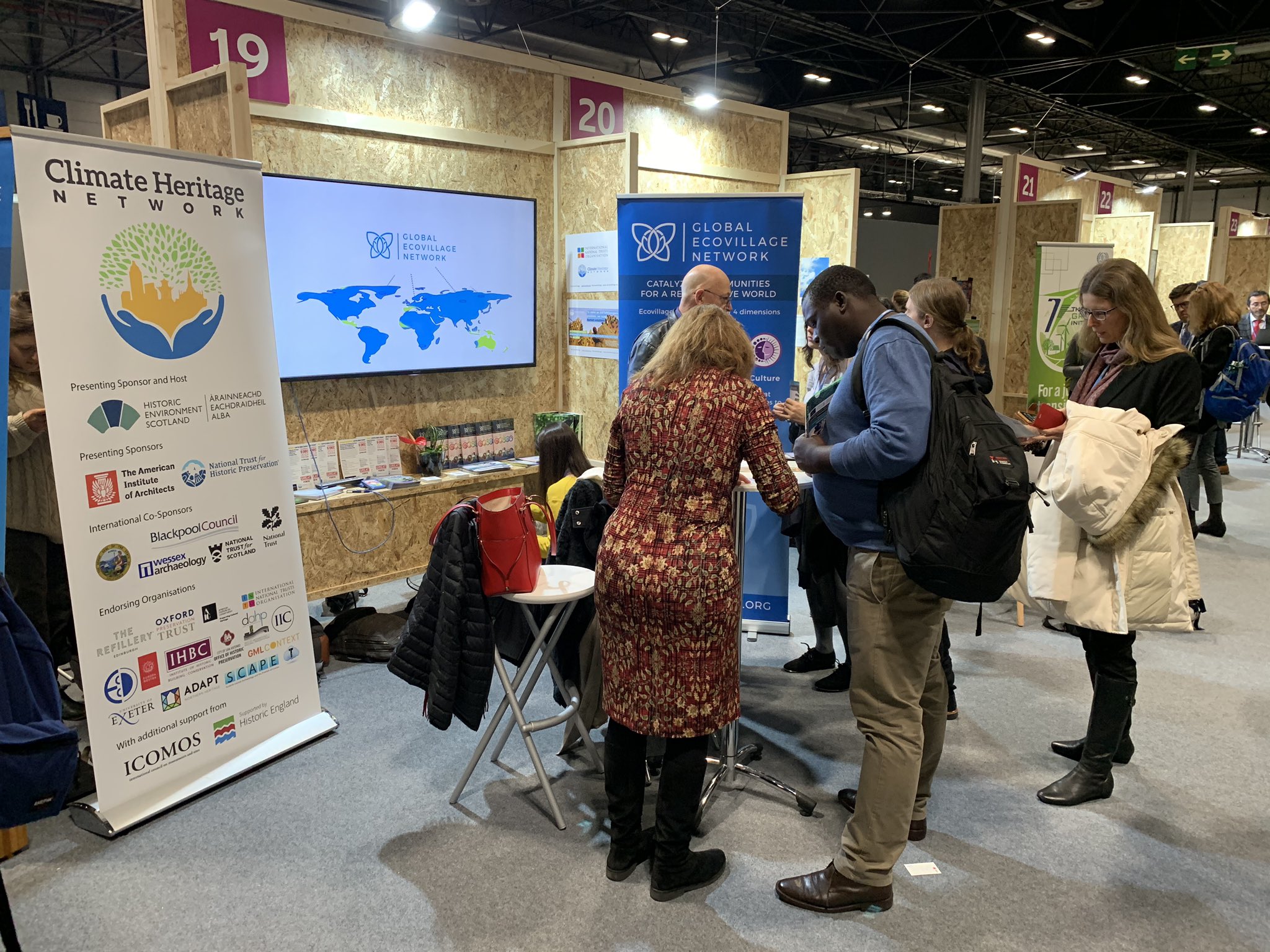 On Friday, December 6th, GEN also hosted the side event “The Power of Culture, Nature and Community-led Development in Response to the Climate Emergency“. We demonstrated how ecovillages and heritage trust organizations can and are helping to scale up ambition, achieve the Paris Agreement, preserve natural and cultural heritage, protect the rights of nature, restore degraded ecosystems, sequester carbon, and lead to healthier thriving communities.

Find out how the Global Ecovillage Network is having a strong impact on climate change, resiliency and adaptation all around the world, and discover how community-led solutions are helping regions and countries to achieve the Sustainable Development Goals (SDGs) and the Paris Agreement National Determined Contributions (NDCs). Watch the full side event:

On Saturday, December 7, the Global Ecovillage Network was invited by the German Federal Environment Ministry (BMU) to support the launch of their new programme supporting local climate and biodiversity projects in developing countries and emerging economies. The programme, “Capacity Building and Finance for National and Local Action on Climate and Biodiversity (CBF)“ – implemented by GIZ over the next six years – aims to get small, context-tailored, innovative ideas off the ground while at the same time strengthening capacities of smaller organisations – a first in the history of the BMU’s International Climate Initiative (IKI). 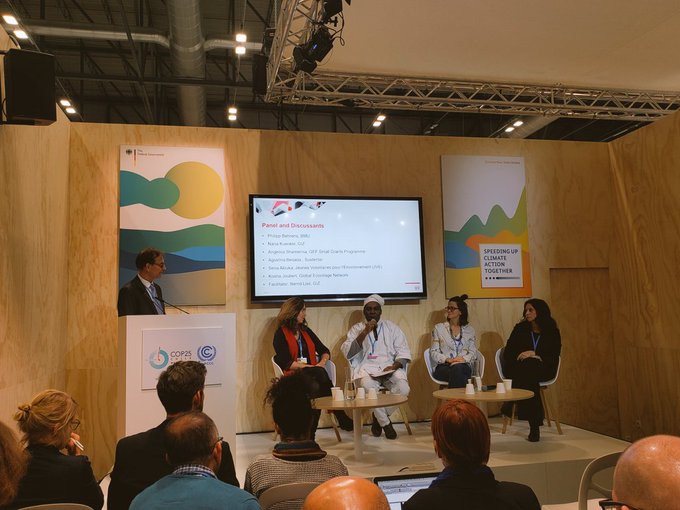 On Monday, December 9, the Global Ecovillage Network was invited at the South African Pavillon to participate in the side event “Addressing Climate Change Through Community-Led Development“ and share successful experiences from Morocco, Colombia, Nigeria, Cameroon, New Zealand, and Scotland. We addressed the reality of the communities that are directly affected by climate change and that have on the ground, effective solutions towards a more regenerative future. 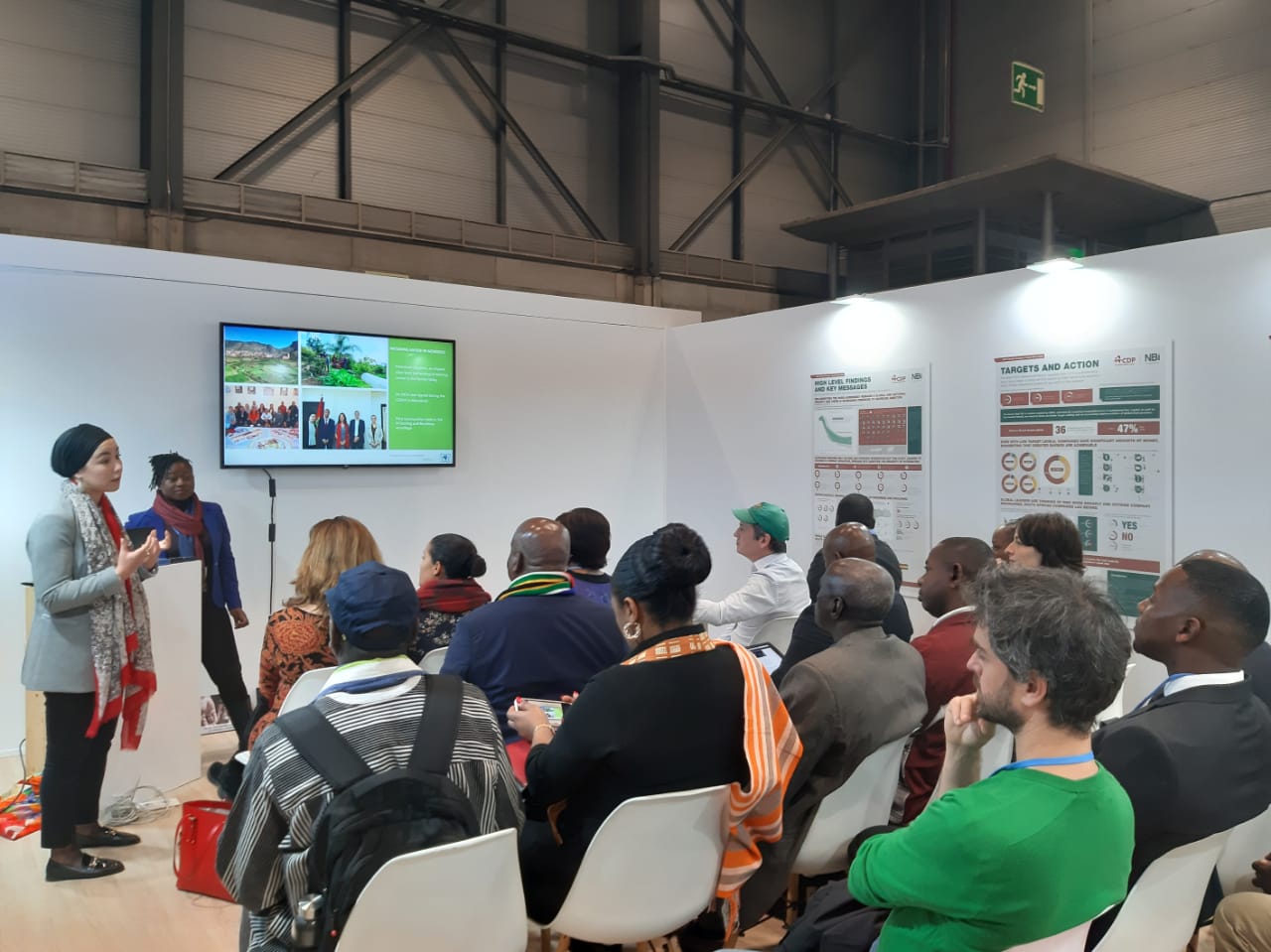 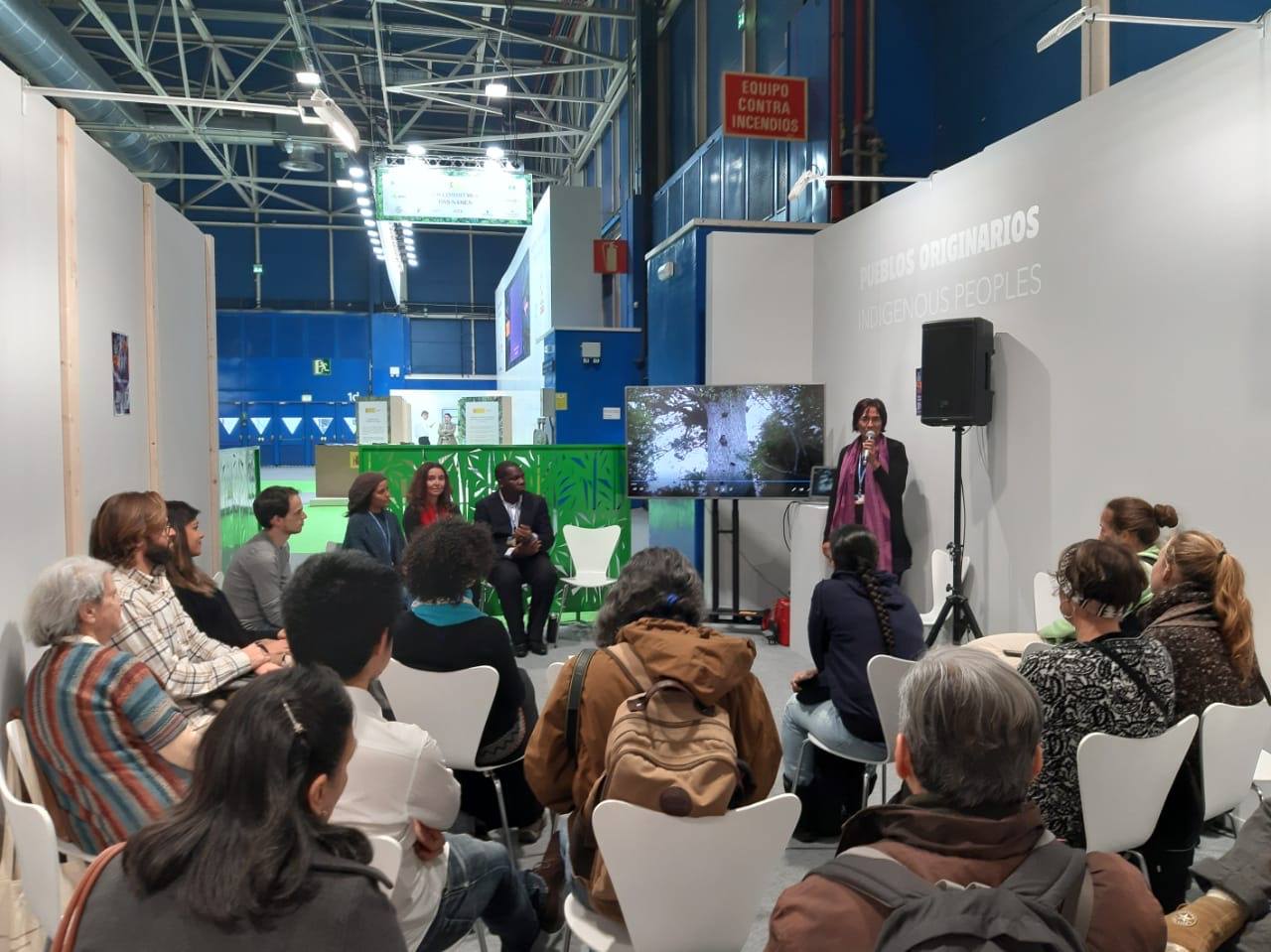 At the Blue area of COP25, negotiations were sticky and focussed on issues of carbon trade rather than the radical transformation of human presence on this planet that is so desperately needed. Whilst, the Global Ecovillage Network (GEN) signed or deepened agreements with 8 African Countries for the implementation of ecovillage development programmes.

Ministers of Environment from The Gambia, Sierra Leone, Sudan, Togo, Liberia, Nigeria and Burkina Faso signed Memorandums of Understanding (MoU) for nation-wide implementation of GEN’s Ecovillage Development Programmes. An agreement with Democratic Republic of Congo was also signed. but with a letter of support from the President, rather than an agreement with the Minister of Environment.

The Minister of Environment of Nigeria, Dr. Mohammad Mahmood Abubakar, was impressed to get to know more about our work. Yaou Mey, head of Climate Change division of Togo, also enjoyed exchanging ideas with our delegation.

In combination with our existing programmes and more than 6000 communities and initiatives in 114 countries, GEN has grown into a tapestry of hope, with each of our projects on the ground as a possible entrance point. 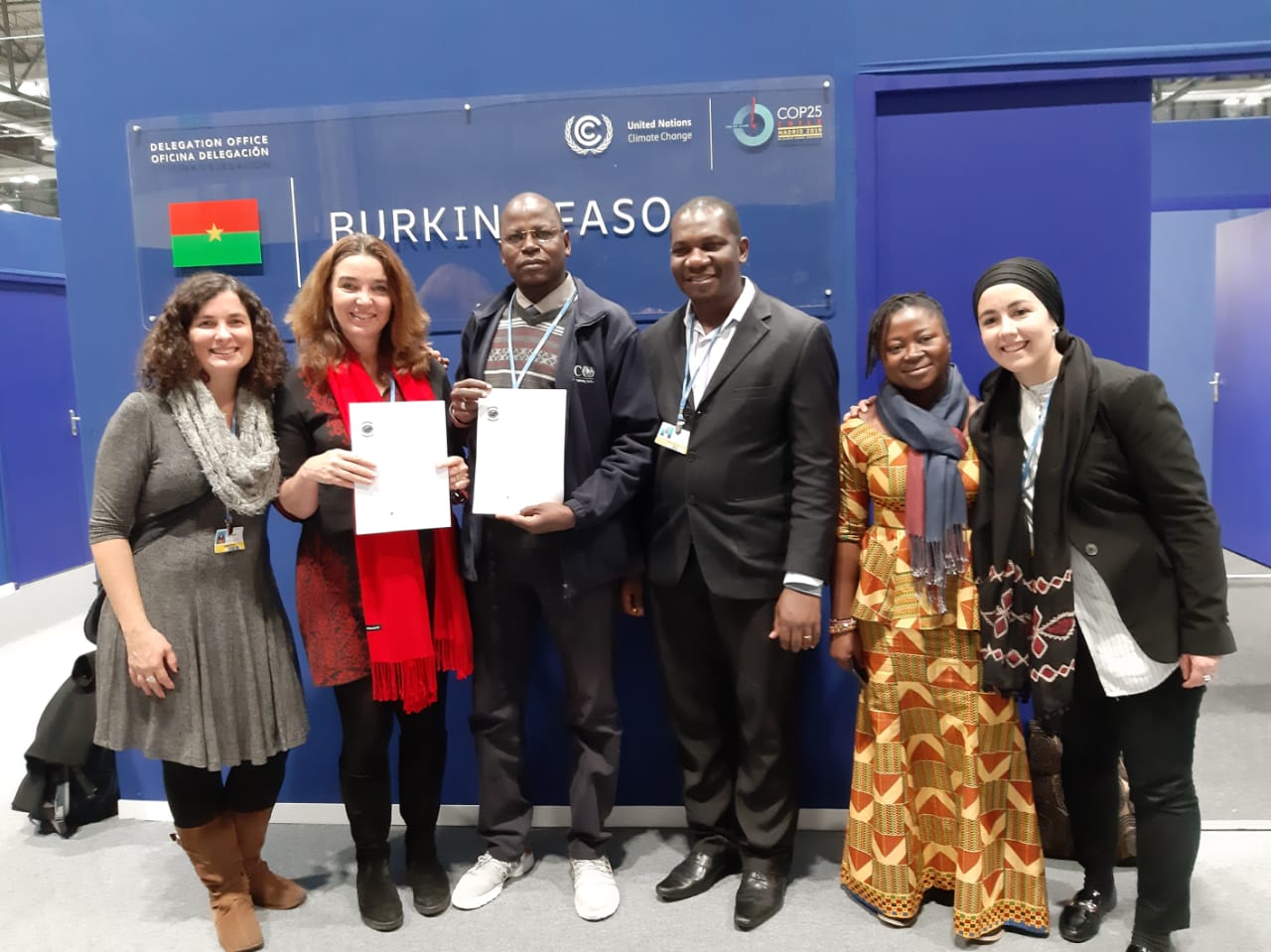 The Conference of the Parties (COP) is the annual meeting of the nations signed up to the UN Framework Convention on Climate Change (UNFCCC). Its purpose is to advance global action to tackle climate change.

At COP21 in 2015, 195 countries signed up to the Paris Agreement, which committed them to keep global temperatures “well below” 2 degrees Celsius above pre-industrial times and “endeavor to limit” them even more, to 1.5 degrees Celsius. In addition, industrialized countries agreed to pay US$100 billion a year by 2020 to help developing countries to decarbonize their economies.

Following agreement on the implementation guidelines of the Paris Agreement at COP 24 in Poland last year, a key objective of COP25 is to complete several matters with respect to the full operationalization of the Paris Climate Change Agreement.

About the Global Ecovillage Network

The Global Ecovillage Network (GEN) catalyzes communities for a regenerative world. GEN is a growing network of regenerative communities and initiatives that bridge cultures, countries, and continents.

GEN (ecovillage.org) builds bridges between policy-makers, governments, NGOs, academics, entrepreneurs, activists, community networks and ecologically-minded individuals across the globe in order to develop strategies for a global transition to resilient communities and cultures.

An ecovillage is an intentional or traditional community that is consciously designed through locally owned, participatory processes in all four areas of regeneration (social, culture, ecology, economy into a whole systems design) to restore and regenerate its social and natural environment.

Ecovillages are living laboratories pioneering beautiful alternatives and innovative solutions. They are rural or urban settlements with vibrant social structures, vastly diverse, yet united in their actions towards low-impact, high-quality lifestyles. 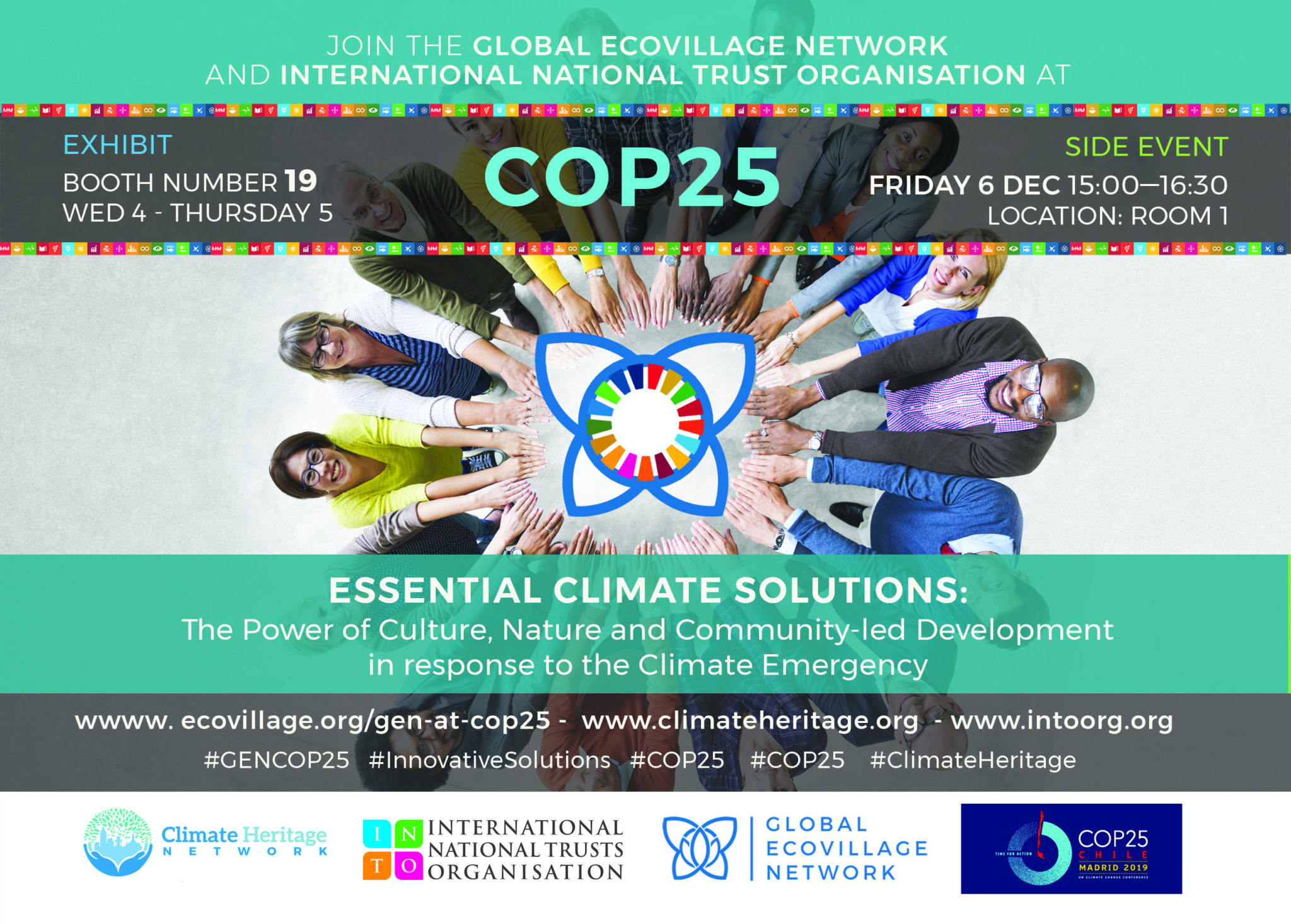 Examples of GEN in action

Ghana Permaculture Institute has implemented sustainable projects that mitigate carbon buildup in the atmosphere on a large network scale. GPI currently has about 8000 farmers in Ghana who use permaculture and organic farming practices. Through education and training, these farmers gain knowledge and are able to implement farming practices such as tree planting, mulching, mix cropping, mix farming and crop rotation. In addition, they are taught how to recycle their organic matter into compost as a fertilizer and also recycle sawdust into edible mushrooms.

Tamera Ecovillage in Portugal has brought a dry inhospitable region back to life using water retention landscaping, keyline contouring and water retention ponds. This has been achieved despite the community being in a drylands region where the streams would normally go dry within weeks after it rains. As a result, the land has now been transformed biodiversity restored. Now the streams run year round in this verdant ecotopia, with fruit orchards, a vineyard, and an abundance of plants and animal life.

Irish Showcase Ecovillage, Cloughjordan measures its climate impact in four dimensions of sustainability and finds it has a significantly lower climate impact than the national average. Cloughjordan’s low-carbon lifestyle is supported by its Ecological Charter which specifies the ecological standards for building in the ecovillage, ensuring that the homes are low-energy and ecological in the materials used. Its district heating system supplies the water that heats all its homes in a carbon-neutral way, using only renewable energy. In addition, the Community Supported Agriculture farm, composed of members from the ecovillage and the surrounding community, grows food using organic and biodynamic methods, and systematically regenerates the soil.