Currently looking for some paws to help us ^.^ The Catfarm is an off-grid welcoming community of travelers, (digital) nomads, artists, healers, entrepreneurs and anyone with the will to explore an alternative lifestyle closer to nature. 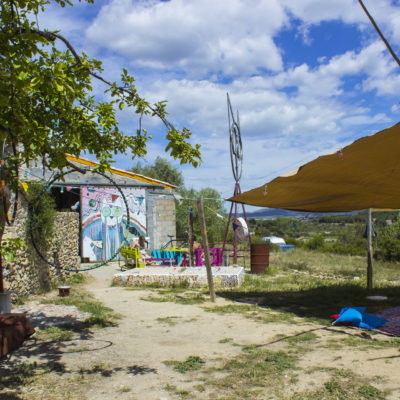 Once upon a time uncle Ruud decided to leave The Netherlands, his home country, as he had fallen in love with the golden colors and stunning hills of Southern France.
Despite having no experience in agriculture, uncle Ruud started cultivating grapes for wine production. In the late 80s, he bought the property we now know as the Catfarm, previously named “de Mas”. He lived and worked in the farm for 22 years, most of the time alone, until his son Ulysses joined him in 2012.
At that time there were 12 cats (now only 3) indulging in a reign of terror by constantly walking through recently applied cement and knocking over paint cans. To make life more fun, Ulysses invited travelLers from Couchsurfing to work together, and from that moment on, the project became known as the Catfarm.

We are right in between Portugal, Spain and the rest of Europe. This allows us to be the future hub for awesome traveling cats, to host, share, and create!  In this high speed changing world, we aim to be a focal point in an alternative way of living. We want to merge people’s knowledge to develop events, self-sufficiency and flourish into a wellbeing paradise. … END_OF_DOCUMENT_TOKEN_TO_BE_REPLACED