You are here: Home / News / Global Impact: The 2022 Ecovillage Gathering

After three years, four days didn’t feel like nearly enough for this homecoming European Ecovillage Gathering which was hosted by Ananda Gaorii, LØS (the Danish network),GEN Europe and GEN Ukraine in Denmark this past July.

Hundreds of ecovillagers and explorers from across the world joined this exploration and celebration of ecovillage life, many for the first time.

This year’s Gathering was characterised by a special weaving of the Ukrainian and Danish ecovillage experience showcasing in a very practical and deeply moving way the strong solidarity within GEN and how the Ukrainian Ecovillage Network became a School of Resilience in times of war, co-creating the Green Road Project which hosts internally displaced people, fundraises and provides food and shelter, rebuilds houses, cooperates with other national networks for hosting fleeing refugees in other countries.

This contrast of War and Life, Crisis and Rejuvenation was alive through the whole Gathering and we could observe through workshops the underlying pattern in many fractals of our wider reality: intense unravelling and fragmentation of the world we used to know – crises in established communities, war/s, energy crisis, evident climate change, UN’s acknowledgement of the upcoming global collapse  – and the increasing push to rebuild and regenerate. The ancient principle of destruction and creation is unfolding now on a new scale in the ever-interconnected and complex modern world.

Raised in the culture where illusion of stability and growth are measures of success, we may initially see crisis in communities as a failure of the idea or that something was done wrong, but the depth of sharing and exploration at the gathering anchored our understanding of it as a normal course of development.

This deep journey throughout the gathering was woven and supported by the underlying principles of a vision quest. Initiating the gathering with the theme of WILDERNESS, exploring chaos and crisis on the first day. Following the traditional path of a vision quest, on day two of the Gathering we processed our reactions to crisis and uncertainty and explored social processes and restorative practices from communities around the world, based on the theme of ACCEPTANCE. On Day 3 moving into VISIONing and getting inspired by Dougald Hind, co-founder of the Dark Mountain Project who wove a rich and moving story of past, present and possible future (Click here to listen to the story).
And eventually moving into ACTION on the last days, transforming the energy generated at the gathering into new seeds of co-creation and hope between all who joined this exploration and celebration of ecovillage life and beyond.

GEN International was actively holding the Global Impact track programme during the European Ecovillage Gathering with workshops on Ecovillage Transition in Action, Ecovillage Research and Empowering Transition through Ecovillage Tools & Principles. In addition, we were also initiating an international panel on the theme of “Crisis in Communities” while exploring the following questions throughout our programme:

What does it mean to create global connections?

What does it mean for culture, social change, ecologic rebalance, and redefining economics?

The meaning of global connections and the EDE (Ecovillage Design Education) as one of the best ways to engage people in the network/movement became especially visible through an in-person meeting of in total 7 participants and the lead facilitators of the 2021 online EDE.

The coming together of our global family also created sparks of inspirations, discussions and first seeds for the creation of an Ecovillage Research Institute, a database to support academics in their studies and the advocacy work in showcasing the impact of Ecovillages worldwide.

If you didn’t have the chance to make it to this gathering, we have good news for you!
It is going to come back next summer in the Nature Community in Germany.
Until then, stay tuned and make sure to sign up to GEN Europe’s newsletter to be first one to receive more details!

More stories about the gathering?
Read about the highlights from GEN staff Eva Goldfarb:

Working with the hats of GEN International and GEN Europe as the Gathering ESC, I had the privilege of living in the world view dimension of sustainability for the month I spent at Ananda Gaorii alongside international volunteers and our Gathering Dream Team from GEN Ukraine.

Witnessing the GEN_Ukraine’s resiliency work in action was an act of inspiration. Witnessing GEN working like a mycelium bringing support to where it is needed in the form of food and supplies, transporting information at record speed, transporting energy in the form of people safely all across europe, and building new mycelium within that system in the form of communities not unlike the one built during the creation of the Gathering.

As one of the participants in the first Online Ecovillage Design Education course, I had the joy of meeting many of my online family. Aliix had travelled to Europe for the first time from Guatemala with a beautiful Mayan sculpture made entirely of cacao. Elisangela, GEN Ambassador and part of the GEN Africa Council, joined a Plenum panel with representatives from each of GEN’s regions discussing how to bring our words and ideas to action on a global scale. Bruna, who visited Europe for the first time and who I have the joy of working with on the Twinning Schools project, Lisa Lena both signed up as Gathering on-site volunteers helping us host the four-day intimately magic experience and Carolin, my GEN colleague and EDE course support. 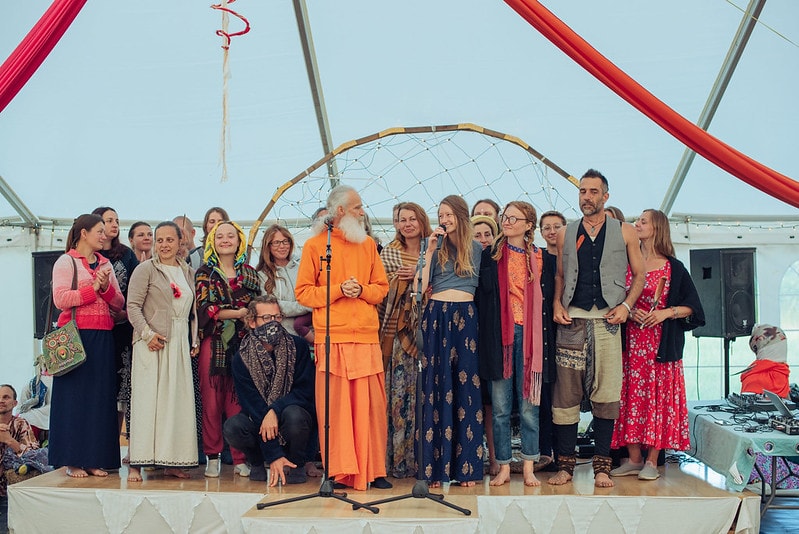 Originally from Germany, growing up close to the Alps, Carolin moved to Findhorn, Scotland and started to work with GEN back in August 2019. Initially for a year-long internship as part of the European Solidarity Corps. Now Carolin is serving as GEN’s Office Coordinator and Education Assistant. Before working with GEN, she spent time abroad visiting different ecovillages and intentional communities in Germany and the UK and participated in a year-long program called Project Peace.