Ethan Hirsch-Tauber is an earth pilgrim, having travelled widely as an educator and coordinator of ecological projects and community-based initiatives around the world. American-born, he has spent most of the past eight years living in a range of communities outside of the US, working as a sustainability educator, and becoming increasingly involved in the ecovillage movement. He presently lives in Tamera, in Alentejo, Portugal, and serves as a representative in the GEN Europe Council. 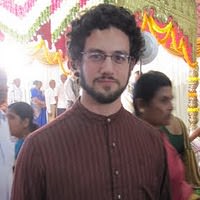 Ethan Hirsch-Tauber (Tamera, Portugal) is an earth pilgrim, having travelled widely as an educator and coordinator of ecological projects and community-based initiatives around the world. While American-born, he has spent most of the past eight years living in a range of communities outside of the US, working as a sustainability educator, and becoming increasingly involved in the ecovillage movement.

He has been involved with GEN since his first conference in 2010. In 2015 he served as the Office Manager and Internal Communications Director at GEN's international office located in Findhorn, Scotland. While there he reactivated the GEN Ambassadors program, oversaw the renovation of the GEN International website, and coordinated GEN+20, GEN's 20-year anniversary conference, held in Findhorn. Prior to his work at the GEN International office, he worked with many others in the rebuilding and strengthening of NextGEN and helped to develop regional networks, primarily in Africa and the Middle East. In 2016 Ethan left his job in Findhorn and moved to Tamera Healing Biotope in Alentejo, Portugal, where he makes his home now. In 2017 at the GEN Europe Conference in Angsbaka, Sweden, he was eleted to the GEN Europe Council. His current inspiring projects are coordination of the annual fruit harvest in Tamera and working with the Blueprint Alliance in creating a model regenerative refugee camp in Tamera, and the educational tools it will generate.

Prior to his shift towards ecovillages, Ethan spent four years working in the United States in the field of green building and energy efficiency, and then completed his Masters degree in Environmental Education at the Audubon Expedition Institute through Lesley University. His work as an ecovillage educator began in 2009 where he taught for four years as a faculty for Living Routes sustainability study program in Auroville, India. In mid-2013 he became the Director of Living Routes’ Lotan program, until Living Routes closed its doors in January of 2014. Since then he has been a teacher for three Ecovillage Design Education courses, in Azores, Portugal, South Korea, and in Auroville.

For the past several years, a group of empowered young people have been creating an inspiring movement within the existing ecovillage network. NextGEN is a youth-focused and youth-directed part of the Global Ecovillage Network. NextGEN is building youth-oriented projects in every region of GEN and its members represent a wide diversity of youth from around the world. This article by Ethan Hirsch-Tauber will share some of the different voices, in order to give a window into what NextGEN is, and … END_OF_DOCUMENT_TOKEN_TO_BE_REPLACED

Organised by GEN in partnership with Gaia Education, the Findhorn Foundation and New Findhorn Association, the GEN+20 Summit is an invitation to celebrate 20 years of walking our talk. You are warmly invited to join us in honouring some of the elders of the ecovillage movement, celebrating the present holders of energy from all corners of the world and continuing to look ahead with the next generation at where our learning edge for sustainable living is now. Together, we will share realistic … END_OF_DOCUMENT_TOKEN_TO_BE_REPLACED